One World Many Stories

We started off the Summer Reading Club with a Bon Voyage Party on Monday, June 6. I don't know if we have official numbers yet, but we were busy the entire 2 hours and had to run people off with sticks at the end.

We had a scavenger hunt where children had to find animals, who were staff wearing animal stickers on their shirts. We had crafts where the children made Eyes of God, Cherry Blossom Trees, and Carnival Masks. The games included a Chopstick Relay Race, Cup Stacking/Card Stacking, Feed the Penguin Toss and Pin the Nose on the Sphinx. Add hot dogs, nachos and slushies to the mix and you have quite a party!

The first week is coming to a close today. We'll add our Thursday Programs next week with performers from the cultures we are studying this summer.

I started the summer storytimes this week with babies & toddlers, 2s & 3s and 4 to 8-year-olds. The babies & toddlers program was easy to integrate our theme for SRC. I use the Mother Goose on the Loose set-up by Betsy Diamant-Cohen. The legend of Mother Goose started in France in the 1700s, so most of the rhymes and songs I do each week will fall under the category of "Europe." I also found some wonderful multi-cultural versions of Mother Goose in our collection. 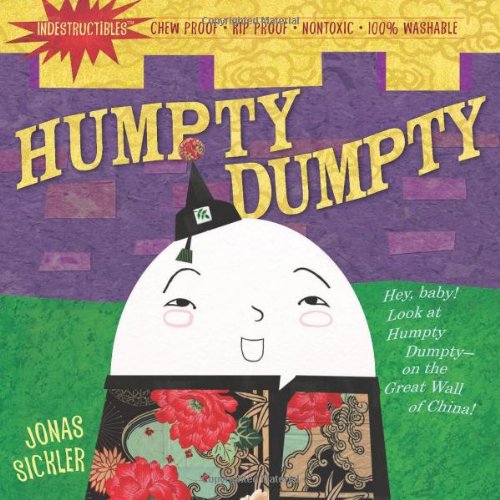 For the 2s & 3s we chose a variety of themes: Transportation, Anansi Spider, Families Around the World, Folk Tales, Lullabies, Oceans, Penguins and Music. This past week, we talked about Transportation. I used my normal bag of tricks, but added a couple of extra things. I've added some foreign language to our opening song by teaching different ways to say Hello. The first week we learned "Bonjour" for Europe. We made a sailboat out of shapes.

I went to a Storytelling workshop a couple of weeks ago because I want to incorporate more oral storytelling in my programs. So, for the 4 to 8-year-olds this year, I am telling stories rather than reading from books. The first week, I told the story of The Frog Prince from Germany and The Giant Turnip from Russia. I had volunteers for the turnip story, which would have worked better with older children. All the volunteers were the younger children of the group, and they didn't want to touch each other for the "pulling" part. I had expected the older children to volunteer and the younger ones to watch. It was pretty funny anyway with the little ones adding their own pizazz.

For the craft we made our own frog with a flicking tongue. We painted two paper plates, one red and the other one green. Glued those together, so the colors were facing out. We cut frog legs out of green paper and stuck those in between the two plates and folded the plate in half. We made eyes by glueing cotton balls to the top and cut out small black circles for the pupils. To make the tongue, cut a small slit in the middle of the fold and push a party blower through the hole. Blow to make the tongue go in and out! 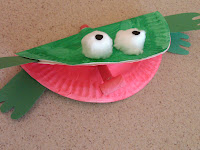 Next week we go to AFRICA!
Posted by Mrs. Darling at 12:43 PM No comments: