If the title of the book intrigues you, you probably have a small child at home. Or perhaps, your little one loves monsters like my son. Henry and Eve are the main characters who are going through a whiny stage. Their father warns them, if they continue, a monster will come and eat them up. Henry and Eve, of course, do not believe him and continue with their complaints and bad attitudes. Eventually, a monster does capture them and takes them to "the bad side of town." After much arguments between the monster and his wife plus the neighbors, Henry and Eve stop whining and escape. The book ends with the children behaving well, but "to tell you the truth" they still sometimes whine.

I chose this book from the library's new shelf because I hoped to combat my son's new fondness for highly nasal and sometimes deafening conversations while playing to his love of all monsters. When I read it to him word for word, he was intersted in the monsters but ignored the whiny children. When his dad made his own rendition of the story, as he usually does, Bobo was terrified. Instead of the children escaping, they were devoured by the monsters. Needless to say, we had a sleepless night after that ending.

As a whole, this book is better suited for older children who understand the difference between real and make believe. It is understandable to try to associate a consequence with an action, but being eaten by monsters may not be the best one. Most of the reviews of the book agree it has humor better suited for parents rather than children. The illustrations are simple line drawings with little color. The large pages have lots of white space and the text is littered with dialogue.
Posted by Mrs. Darling at 2:28 PM No comments:

Construction books are fascinating for 2 and 3-year-olds. They show how everything works. My son (2) is in love with Big Wheels by Anne Rockwell. He is a frequent visiter of construction sites and a relative expert on "BIG TRUCKS." Rockwell uses illustrations to demonstrate the job of each construction vehicle in bright colors. She adds an element of whimsy by using pigs as the people who drive these trucks. The text is simple and is printed on white space left at the bottom of the illustrations.

If you are looking for even more construction books (and if you have a toddler, I know you are) try: Easy street by Rita Gray; Dig, Dig, Digging by Margeret Mayo; or Curious George and the Dump Truck by Margret and H.A. Rey. 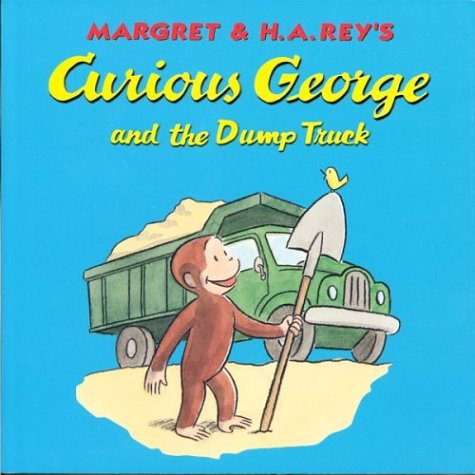 For our meeting we will be exploring Pioneer Days. Pilgrims, the West and covered wagons are just some of the topics we will discuss and use in our activities. This is our last meeting before the end of the year, so don't miss out.
Posted by Mrs. Darling at 1:20 PM No comments:

Halloween can be a scary time for a child. Pumpkins seem to be a safe topic to introduce your child to the fall season and the holiday. My son, who just turned 2, is fascinated with the moon. Tim Preston's book is the perfect story to relate something safe, like the moon, with something new, like Halloween.

The illustrations are large and detailed, so you can add your own commentary to the sparse narrative. This would be a good book to share with a group of children.

Challenge Club for Girls and Boys

So, we only had one boy so far at our meeting, and he was somebody's brother. Not a problem! We've invited them, right girls? Our theme this month is Fantastic Creatures, which are creatures no longer seen on earth today (yay for dinosaurs!). Your CHALLENGE BOOKS for this month were Minnie and Moo: Attack of the Easter Bunnies, or The Lion, The Witch, and the Wardrobe. You can claim your prize for reading one of these books at our meeting on Monday, October 25th at 4:30. We will be making some fantastic creatures of our own!
Posted by Mrs. Darling at 9:33 AM No comments:

Our reading challenge is less than a week away. The two books you were challenged to read for the theme wild animals were Mice and Beans by Pam Munoz Ryan and Marley: A Dog Like No Other by John Grogan. Both books have animals that get into tons of mischief. You can claim your prize on Monday, September 27th @ 4:30. We will also have our usual fun with games and crafts.
Posted by Mrs. Darling at 4:01 PM No comments:

Book Review: Julius: The Baby of the World by Kevin Henkes

I've noticed quite a few lovely pregnant bellies lately, so I thought I should do a review of a book for introducing a new baby into the home. Most of these types of books are so sweet and wonderous, but Henkes reveals a darker and funnier side to bringing home baby.

The book begins with Lilly acting the part of a wonderful sister. She reads and sings to her mama's belly. Unfortunately, the story changes when Julius actually comes home. Lilly discovers a new baby takes up too much attention, and he stinks!

Everyone thinks Julius is the baby of the world. Everyone, except Lilly's cousin, Garland. Garland thinks the very same things that Lilly has said throughout the book. So, you would think that Lilly would be overjoyed to have a partner in her baby brother drama club. Oh, no!

Now, Lilly is the one to hail: "Julius is the baby of the world!"


This book captures the essence of sibling rivalry perfectly. Brothers and sisters are going to have disagreements. It is inevitable. If someone on the outside of this tenuous relationship tries to start trouble, though, they will be faced with a united front: family. Henkes uses humor to bring this concept to those who are experiencing the love/not-so-much love relationship for the very first time. Jealousy and sharing are hard concepts for pre-schoolers. Read this book and let yourself laugh about it!
Posted by Mrs. Darling at 6:05 PM No comments:

Bright illustrations and whimsical text are perfect for toddlers who have begun to ask, "What's that?" This is not one of those ABC books that also tells a story. It is a fun adventure through the alphabet, though. Our favorite page is the Octopus playing the Piano.

The high contrast pictures and small board book form are sure to please babies and toddlers. Learn a few new vocabulary words and get a big laugh with Y is for Yak. Just try saying Yak without laughing...
Posted by Mrs. Darling at 6:59 PM No comments:

I haven't reviewed any books in a long time, so I thought I'd review my son's favorite book right now! The Icky Sticky Frog is about a hungry little frog. It has wonderful rhythm and rhyme, so it is perfect for toddlers. The surprise ending will delight children of all ages. It comes in board book form or with paper pages complete with the sticky tongue on the cover. I found my copy at Big Lots for under $2, what a steal!
Posted by Mrs. Darling at 2:14 PM No comments:

I've had many questions about SRC 2010 already! I know you are all excited about joining the reading club for all ages during the summer. We have fun activities planned for the whole family. We'll kick things off this year at the South Branch with a water-themed party. Wear your bathing suits and bring your own towel because you will be getting wet! The fun starts at 6 on June 7, 2010. You can sign up for the reading club, or just enjoy the festivities. Food will be served while supplies last. I can't wait to see everyone!
Posted by Mrs. Darling at 2:04 PM No comments:

Email ThisBlogThis!Share to TwitterShare to FacebookShare to Pinterest
Labels: SRC 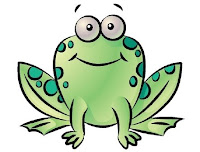 We are taking a week off before Spring Break, so we can have some springy fun for those of us who are not going away. This year, we are holding Spring Fling during Spring Break. Our theme is "Spring into Spring" and we'll be doing lots of jumping. This is a great theme for all ages, because even the littlest child likes to bounce and jump. You can come dressed up as any animal that hops! Wednesday, April 7th from 10:30 to 11:30, we will have stories, crafts, games, and a snack!
Regular storytimes will start again in two weeks on April 14th and 15th and continue through the end of the month.
Wednesdays- Ages 3-5 @ 10:05
Thursdays- All Ages @ 10:05, Babies/Toddlers @ 11
Posted by Mrs. Darling at 12:15 PM No comments:

Do you work all week long? Storytimes are held every week during the day, so working parents cannot attend. We don't want you to miss out on an opportunity to bond with your child over books.
About a year ago, we started holding storytimes at night once a week on Mondays from 7-8. Budget cuts led to staff hours being cut, so we went down to every other week on Monday night. Unfortunately, it made it difficult for parents to come each time.
For this session, we decided to try Family Storytimes once a month on Saturday morning. So far, the attendance has been low, but we are hoping for more interest. If you have never come to a storytime before, this program is for you!
Meet other parents with children the same age as yours! The library is a great meeting place. Don't let this opportunity pass you by, because it may not be offered again. Spread the word about Saturday Storytimes!!!
Posted by Mrs. Darling at 9:53 AM No comments:

The weather outside may still be cold, but the librarians at KHCPL are looking forward to blue skies. With that in mind our storytime session will be about all things Spring. Join us this week for stories in the garden. Then, make a craft to go in your own backyard.

Remember to sign up at the Reference Desk for the Wednesday storytimes. All ages are welcome Thursday mornings, and babies and toddlers come for the 11 a.m. slot.
Posted by Mrs. Darling at 5:29 PM No comments:

Email ThisBlogThis!Share to TwitterShare to FacebookShare to Pinterest
Labels: Storytime

It is finally here! We had a long break, but family storytime is back. Sign up at the Reference Desk now and enjoy a morning full of fun for everyone. I'll huff and I'll puff and I'll blow your house in! Just a hint of what awaits you on Saturday, January 23rd from 10:30-11. Come to hear stories and stay for crafts!

That is correct, I've added craft time to this session. Don't miss out!
Posted by Mrs. Darling at 3:16 PM No comments:

Winter programs kick off on Tuesday, January 12th with the Girls Club's Fun with Food. We are going to make a delicious craft and play some foodastic games! Join our reading club at 4:30.

Babies and toddlers will have some Mother Goose fun at 11 on Thursdays.
Posted by Mrs. Darling at 3:27 PM No comments: