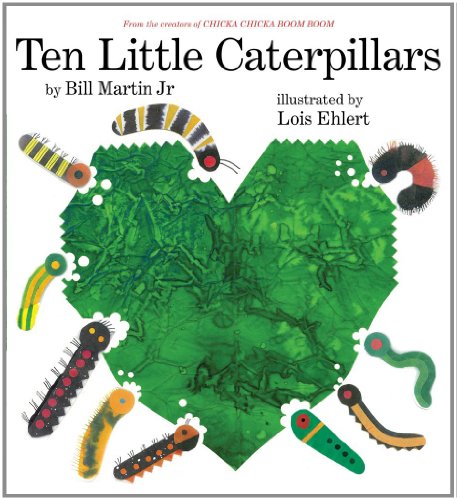 If you heard a squeal of delight in the library today, it wasn't coming from the children's area. It was coming from the back, where I finally got my hot little hands on Ten Little Caterpillars by Bill Martin Jr. and illustrated by Lois Ehlert.

I'm a Ehlert fanatic, so there is no surprise that I love this book. The big surprise was that I love it even more than its predecessors: Eating the Alphabet, Planting a Rainbow and Color Zoo. Bill Martin Jr. adds zest with his rhyming, lyrical text. From the beautiful cover to the last pages of large numbers accompanied by illustrations. It is the perfect storytime book.
Posted by Mrs. Darling at 4:26 PM No comments:

One World, Many Stories: Africa 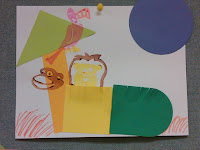 It happened, again! The Summer Reading Club is a force of its own. One that demands all of my attention and focus. Now, I'm going to play catch up and finish posting the activities we did this summer.

There are spiders in Africa?!

One of the most famous characters from African folklore is Anansi the spider. Even though I was pretty sure I would have some frightened children on my hands, I still told stories about this trickster.

Although many children start developing a fear of bugs, especially spiders, at this age, they will always sing "The Itsy Bitsy Spider." After I read Anansi and the Magic Stick by Eric Kimmel, we sang this classic tune. Next, I told the story of The Very Busy Spider by Eric Carle with beautiful watercolor laminated figures made by Jo Kay. The children chanted with me, "She was too busy making her web." After sitting for so long, the little ones were ready with some wiggles and giggles. I taught them Criss-Cross Applesauce and partnered them with their caregiver.

Once all the wiggles and giggles were out, we read The Not So Itsy-Bitsy Spider by Dawn Bentley. I loved this book, but the children were anxious for the next activity. I can't tell if they are always looking forward to the musical instrument/scarf time, or I'm making poor choices in books.

We matched flannel spiders in different colors for the matching game. I used the Ellison die-cut to make 5 different colors of spiders for the children to put on the board. Some of them were even scared to touch the flannel spiders, which I hadn't anticipated. Instead of musical instruments this week, we used the color scarves. I'm always surprised by how much the children enjoy playing with these. We sang our "Wave Our Scarves" together song, which is adapted each week for the activity. Then, we sang "The Spider in the Web" adapted by Miss Angela.

The Spider in the Web
(tune of Farmer in the Dell)

We spun our scarves in circles, then used them to catch the insects flying around (imaginary of course). Last, we listened to Raffi's "Spider on the Foor" and put the scarves on our body parts as he named them. The craft was my favorite part, which doesn't happen very often. We used school glue to draw a spider web on black construction paper. Then, we twisted 4 black pipe cleaners together to form a spider and stuck him on the web. It was very simple and fun with little mess.

We learned the word a-HAL-an. This is how they say "hello" in Egypt. I told another frog story. After we were all done for the summer, I was kicking myself for not finding frog stories from all over the world. I really do LOVE frogs!

I told the draw and tell story "Who Saved the Animals" from World Folktales by Jerry Mallett. It was a riddle, but the picture became the animal who was the answer. The older children enjoyed this method of telling. The other story I told was my version of The Leopard's Drum. I made headbands out of leftover bulletin board border by laminating them and sticking Velcro on the ends. Then, I had laminated clipart animals to tape on for the characters. The best part of the story was when I had the "leopard" climb into the "drum." I need a full-time photographer for my programs. Something funny always happens!

For our game, we played "Mummy Wrap" by getting into pairs and wrapping one child with a roll of toilet paper. The first team with one child completely wrapped was the winner. They had a great time with this activity, especially un-wrapping the mummy. The craft was also lots of fun. I found some jungle animal foam stampers. We used paintbrushes to paint the stamper, then stamped paper. 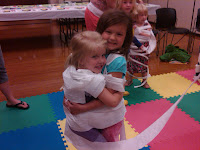 You can't seperate best friends. Alexis and Grace, both age 4, demanded to be wrapped together.
Posted by Mrs. Darling at 9:41 AM No comments:

I have never minded pop culture references in my fiction. Some of them take me back, while others are completely in the moment. I couldn't understand why readers became so annoyed with these popular references. I even quietly assumed they were snobs... Not high brow enough for you? I would like to say to all the reviewers who took a stand against pop culture in fiction, "I'm sorry."

The narrative was going well until about page 60. Then, the author had a nostalgic moment for the mid-1990s. The effect was so strong, I had to recheck the publication date and scour her web site to find out when she started writing this book. The poor choice of popular references took me out of the story. If there was a meaning to these choices, I simply did not "get it."

Spellbound would benefit from a massive editing effort to rid this book of out-of-date references. There are so many wonderful elements to the book that are lost in the text. The characters are rich and interesting. The story is enticing and, at moments, intense. The voice is witty. I'll leave you with my favorite line from the book and you can make the choice to "take it, or leave it."

"She was so cold, she probably farted ice-cubes." -- Emma, Spellbound