Guffey Acres is a local farm that turns into a Fall Activy Center in October. They have tractor pulls, sand and corn boxes, slides, hay jumps and a petting zoo. Indiana boasts many of these locally owned and operated farms. We have three in driving distance.

I took Bobo to the farm last year, but they've added so many attractions that it felt like a different place. We played and learned on the farm for 4 and 1/2 hours with no naps. The weather was beautiful, sunny and 75 degrees. The leaves had already started changing. It was a wonderful day! 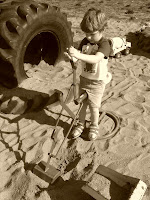 Bobo played for most of the time in the large sand box, which was really just tractor tires filled with sand, and construction trucks. He played with different children as they passed through and enjoyed showing them the secret hiding place inside the tires. 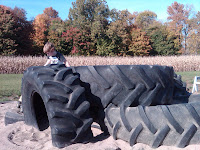 I steered him toward the covered Corn Box to cool down. He played with different construction vehicles. He also jumped, rolled and buried himself in the corn. If they would hide objects in the corn, it would be the biggest sensory box ever. 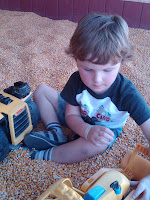 In the middle of the play area, stands a large slide and hay jump. Luckily, we arrived early enough to beat the rush of children after school. He could really explore the hay, climb under the slide through tunnels and slide without waiting in line. Later, all the children (especially young ones) were struggling to get a turn. I didn't feel comfortable, because it was dark and hard to keep track of him amidst the crowd. 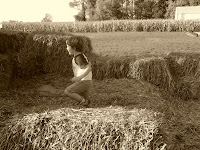 Do you remember Lincoln Logs? I still can't build anything but a square house with one door and no windows, but my little brothers love making small communities. Guffey Acres has the biggest logs I've ever seen. Bobo did not construct his own house, but he helped hand logs to the bigger boys. 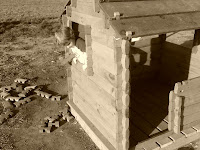 We visited the barn and petted all the animals. Bobo liked the donkey the best. He laughed when the donkey hee-hawed to ask for more treats. After our apple cider slushie, it was too hot for traditional cider, we faced the corn maze. Last year, we were lost for an hour and I was carrying a sleeping Bobo for most of the time. This year, they made a smaller version for little ones. We chose that one and only got a little lost, after Bobo took over the map reading. 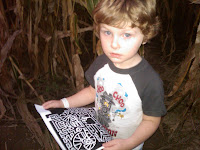 When we made it out of the corn maze, thanks in a large part to being able to follow the sound of the corn cob cannon, it was getting dark. Bobo found a friend to chase around in the sand, shine a flashlight on and play hide-and-seek with until it was time to go home. Overall, it was an awesome first field trip! My favorite part was the apple cider slushie and Bobo's favorite part was everything. 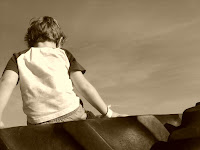