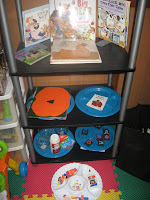 We didn't get the weekly board up this week, because we needed more work with the letter C and the number 2. Bobo colored lots of worksheets and even began to draw his own letter Cs. The first lesson Bobo chose to do this week was a sticker sheet. He put witches on red paper. The stickers were on a long strip, so he used the strip as a rope for imaginative play. First, he used it as a seatbelt and put two stickers on his desk for buttons on the space ship. Then, he used it to climb over the water (2 blue mats) and as a bridge to cross. 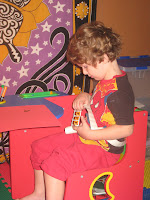 Bobo used the Color Farm from the Farm Lap Book for Tots. Each picture calls for a different color. I covered these in contact paper, so I could re-use them. He still likes to color everything the same color, so this activity was a challenge. He already knows all his colors, though, and has chosen favorites. 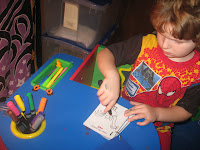 My favorite activity this week was making glue ghosts. Bobo could do this mostly on his own. You squeeze the glue into ghost shapes on wax paper and use foam to decorate them. When they dry, they peel off and you can tape them to the window. Bobo was very proud of his ghosts. He made the ones with stars and legs. 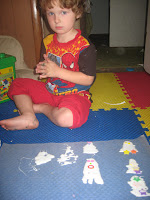 Bobo still loves stamping. I set out several different letters to use this week. He chose to use the letters we studied: B and C. We used orange and purple ink for Halloween. Instead of using construction paper for the stamping activities, I've started using a notebook. We have a lot of stamping action going on so it is easier to organize in a notebook. Bobo drew ladders and bats in his notebook, too. 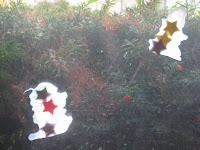 I found a Jack-O-Lantern activity in The Mailbox: Preschool. There are different face cards and shapes you can copy onto cardstock, cut out and laminate. I used felt to make a Fun with Felt Folder. Then, I store the pieces for the felt inside. I'm going to use these folders for the Library's play dates on Fridays. They will be easy to organize and re-use. Bobo made his own faces. 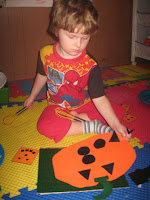 Bobo played with his Halloween Sensory bin. He sorted the ghosts and used cups for pouring. He fed corn to the skeletons. He practiced cutting Play-Doh with a knife and rolling it flat. He was so proud of his ghost project that he insisted on posing with them. 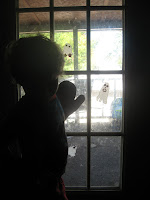 The Books
As you can see by the time dates, I'm posting these lessons a couple of weeks after the fact. I know we read more books than this one, but I didn't write them down. I'm sure they will show up in another post. We really enjoyed Chickens Aren't the Only Ones by Ruth Heller. It talks about all the animals who lay eggs. It is comprised on large, beautiful illustrations. Bobo's favorite part was the big versus little eggs. Ostrichs lay the largest eggs, while hummingbirds lay the smallest.

Art
We visited the Russiaville Library for art this week. Bobo painted his pumpkin pink, black and orange. He made a footprint ghost, which tickled his toes. We played and looked for books and chose a couple spooky movies (Garfield and Scooby Doo). He also completed his first art project on his own, a blue bat. 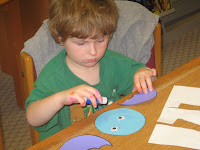 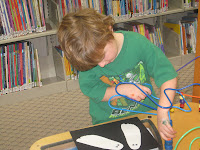 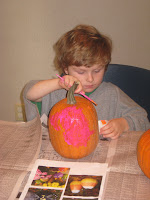