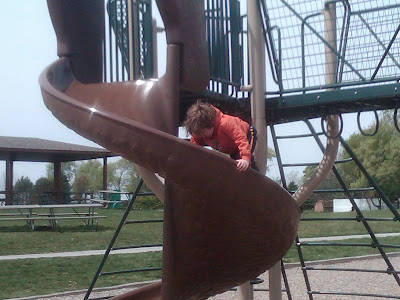 One of the biggest dilemmas I have at the park is if I should allow Bobo to climb the slide. I'm not worried about the safety issue, so much as the other children playing. If the park is busy, I say absolutely no. I've seen children hurt each other because one child slid into the other climbing up.

If the park isn't busy, then I say yes. I know there are other parents who don't allow this any time. I was undecided until I heard a teacher talking about this at a conference. She said on the playground, they have an "up" slide and a "down" slide. The teachers on the playground know the children's abilities and trust them. I want Bobo to know that I trust him, which is more important than ruffling a few people's feathers at the park. 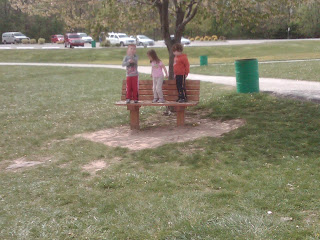 Bobo is so friendly and outgoing, he often pulls other children into his imaginative play. Today, another little boy game up with a Lego Ninjago game. The children followed each other while performing ninja style moves, which brought laughs and smiles to the parents. "Ninja powers go!"
Posted by Mrs. Darling at 5:59 PM